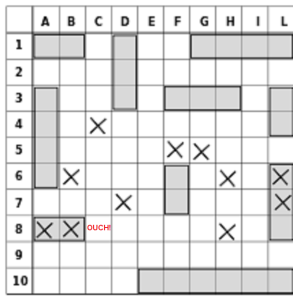 Now, I don’t want to bore you with the details, but I had this thing in my pinkie. Not a splinter or anything, internal. A tingle, loss of feeling, that sort of thing. So the doctor says it’s nothing, just the nerves in a bit of a twist, but she sends me to the neurologist

anyway. And he submits me to a form of torture and confirms what I already suspected – I’m a wimp. I thought of alerting Amnesty International, as it was basically a variant on the electric chair, but apparently it was for my own good. After torturing me, he sent me for a scan, which in comparison was like a trip to Alton Towers. And it turns out there’s a herniated disc with a conflict in C8. I’m not sure what that means. It sounds a bit like Battleships.

Well, obviously I’m reaching the age when they start to poke around inside and chop off bits here and there, but I’d rather postpone it as long as I can, so I went to see Dr. Gousain. He’s a posturologist. I expected something high-tech, but it was disappointingly basic. Touch your toes, look at this pencil. That sort of thing. And then he announced that my spine is the shape of fusilli pasta and my eyes diverge like the Churchill V-sign.

The treatment, theoretically, is simple. Soles in my shoes and a magnet stuck to my

temple. I’m supposed to wear the soles all the time, he said, even in my slippers. The problem being that it’s 30° in Mayotte. Slippers? Why not mitts and a beanie while I’m at it? Most of the day, I’m padding around barefoot. As for the magnet, it stuck for a while but came off in a trickle of sweat and I lost it.

So now the problem is, I don’t know what to say to Dr. Gousain. He promised the tingle would go away as long as I followed the treatment, and I truly believe it would. He’s ever so sweet, and I really don’t want to disappoint him. But when I balance a tingling pinkie with slippers in Mayotte, I’m afraid the tingle wins.

6 thoughts on “The Tingle and the Soles”