Bouéni is the Shimaoré word for woman, but it conveys more than that. A bouéni is mature, imposing and plump. No zero size models here – buxom wives are seen as a sign of vigour and prosperity. Nor are they in any way shrinking violets, Mayotte being traditionally a matriarchal society. There was thus considerable sadness last year at the death of Zaïna Méresse, the last of the bouéni ticklers. The tickling women movement began in the 1960s, a reaction to the threat of independence from France, which the bouénis were keen to avoid. Whenever a Comorian politician arrived in Mayotte, he’d be surrounded by a goup of bouénis who tickled him into helpless, squirming laughter while they repeated their demands. In the 1975 referendum, the three other Comoros islands voted for independence, while Mayotte opted to remain French, a result due in no small part to the ticklers. If only today’s world leaders could be tickled into making good on their promises. 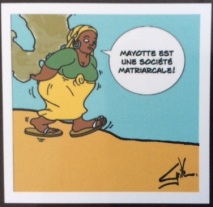 7 thoughts on “The bouéni ticklers”

Follow Journey of a Blogvelist on WordPress.com
Join 985 other followers